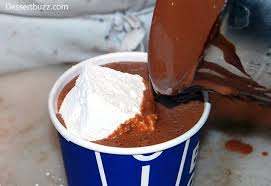 Can you drink hot chocolate in the middle of August on a 100°F day?

Of course you can, if you are a psychopath.

This tells us something important: there is a time and place for hot chocolate.

So now having established that there is a time for hot chocolate, the question becomes: when is it acceptable to drink hot chocolate?

This simple question caused a full week of debate among me and my friends. Every conclusion we came to was debated and discarded.

Nasty words were thrown around.

At times, we almost considered not establishing any guideline at all, but then had to remember we all still agreed only a lunatic would drink hot chocolate on a 100°F summer’s day.

So there has to be some rule, right?

When we finally agreed to a rule, we had to add some caveats.

One of the things that happens to you as you grow older is you…grow older.

Meaning, you stop enjoying the little things in life.

Kids are so full of wonder, they get excited about the little things. So we wanted the rule to incorporate something that kept childhood alive in us as we aged.

Here is the rule:

Hot chocolate season opens up the day you catch a snowflake on your tongue, and stays open for 30 days.

It is not, I repeat not, open on the day it snows. To get hot chocolate, you must go outside, lift your face to the sky, stick out your tongue, and catch a snowflake.

Every day that you do this resets the 30-days, so hot chocolate season ends for you 30-days after the last time you caught a snowflake on your tongue.

This means odd things can happen like a freak snowfall in October might open up hot chocolate season, have it close in November, then start again in December.

This might mean hot chocolate season extends into May because of a freak snowfall in April.

This is an unfortunate consequence of the rule.

What if, you are going skiing/snowboarding on a mountain and catch a (real, not machine-produced) snowflake?

As you go into higher elevation, the probability of snow increases, meaning you can catch a snowflake during times when hot chocolate season wouldn’t normally be open.

The ski-mountain caveat is as follows: If you are on a mountain for skiing or snowboarding and catch a (real) snowflake on your tongue while not in hot chocolate season, you may drink hot chocolate while on the mountain/lodge. Once you leave the mountain, regular rules apply. Snowflakes caught on the mountain do not transfer to non-mountain times.

So there you go, a possible rule for when it becomes appropriate to drink hot chocolate, one that makes you try and keep some childlike wonder.