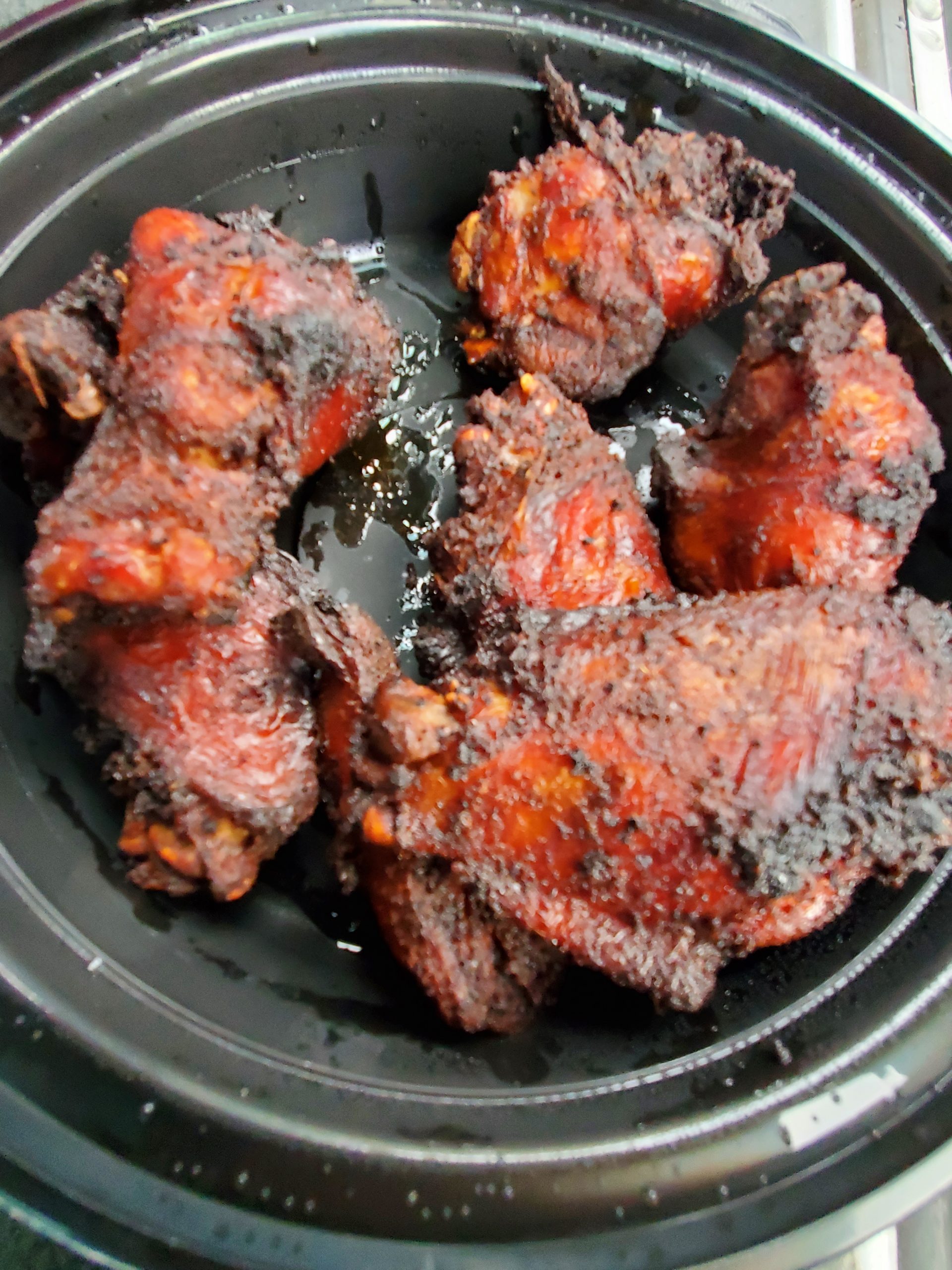 On the search for the best BBQ in Connecticut brings us to When Pigs Fly South (way) out in Sharon.

This unassuming small storefront in Sharon is home to a blend of BBQ styles, given the owner’s Georgia heritage (chopped pork) with a mother from Memphis (sticky ribs) and a father from NOLA (shrimp/crawfish).

Given this blending of styles in the owner, it should be unsurprising that there is not only a blend of traditional BBQ styles (brisket, pulled meats, ribs) as well as some Louisiana-style crawfish and shrimp offerings.

As I’m here for BBQ, I decided to try the pulled pork, the ribs, and the wings.

There are 3 aspects to any BBQ cooking (indeed, maybe any cooking, but that will be the point of a later post)

For reviewing the foods, I’ll start out with what worked least well and move to what worked best.

The ribs were slathered in their standard Southern BBQ sauce. Unlike Memphis-style ribs which are caramelized in a molasses-based sauce, these ribs are cooked in a drier rub and later sauced.

The ribs themselves are stringy and tough.

This occurs when ribs are cooked on too-high a heat, the gelatin inside the ribs shrinks instead of melting.

The sauce is cloyingly sweet, too. With far too much added sugar and not enough umami base.

While a little too dry and stringy, and a standard sauce that is too sweet, the ribs don’t hit right.

The wings here are excellent.

They have a beautiful heavy bark on them (that’s the outside crusting) that is flavorful. The skin pulls off nicely revealing tender juicy meat inside.

The only complaint about the wings would be the sauces.

There are four or five options, including 3 levels of Buffalo, the standard Southern BBQ (too sweet), and a ‘pink’ sauce that is a mix of Alabama white sauce (Alabama white sauce is a mayo-based bbq sauce for chicken) and hot sauce and BBQ sauce.

Wings are beautifully crusted with a flavorful bark.

From a Georgia Native, I was expecting a lot from the pulled pork.

The pork itself was juicy and flavorful, possibly because you get it tossed in a sauce.

I chose the traditional Carolina-style vinegar sauce, which is more like a Western-North Carolina sauce with a vinegar base but plenty of other fixins including spices and some tomato sauce mixed in.

While the pork was juicy, it was also somewhat stringy, which again comes from cooking it a bit too high in heat.

In addition, the bark-crusted end pieces added a beautiful flavor but didn’t have that bit of crunch I was hoping for.

Again, possibly because it was tossed in sauce before serving.

Then, I experimented with the other sauces, and came across an amazing combo.

The Spicy Georgia Peach is very mild but has a nice natural sweetness to it.

The 3-pepper hot sauce is amazing It is insanely spicy. It borders on inedibly hot.

When mixed together, this GA peach and 2-pepper hot sauce create one of the best sauces I have ever tried.

Then, when added to the pulled pork, create a wonderful dish.

The juicy pork, unfortunately a little bit stringy, becomes wonderful when paired with the sauces of your choosing (or mixing). On its own it is excellent and can be made better.

The problem with the ribs and the minor issue with the pulled pork are the same, they are smoked at too high a temperature. This may suggest you should stay away from meats that require a very low temperature to release their gelatin (e.g. ribs, brisket). Instead, meats that aren’t as affected because they don’t require the release of lots of fat (the chickens, shrimp, to a small extent the pork) are a better bet. Also, I cannot stress this enough, get the Georgia Peach Sauce and the 3-pepper hot sauce and mix them together in whatever ratio you can handle. It is a wonderful combination.