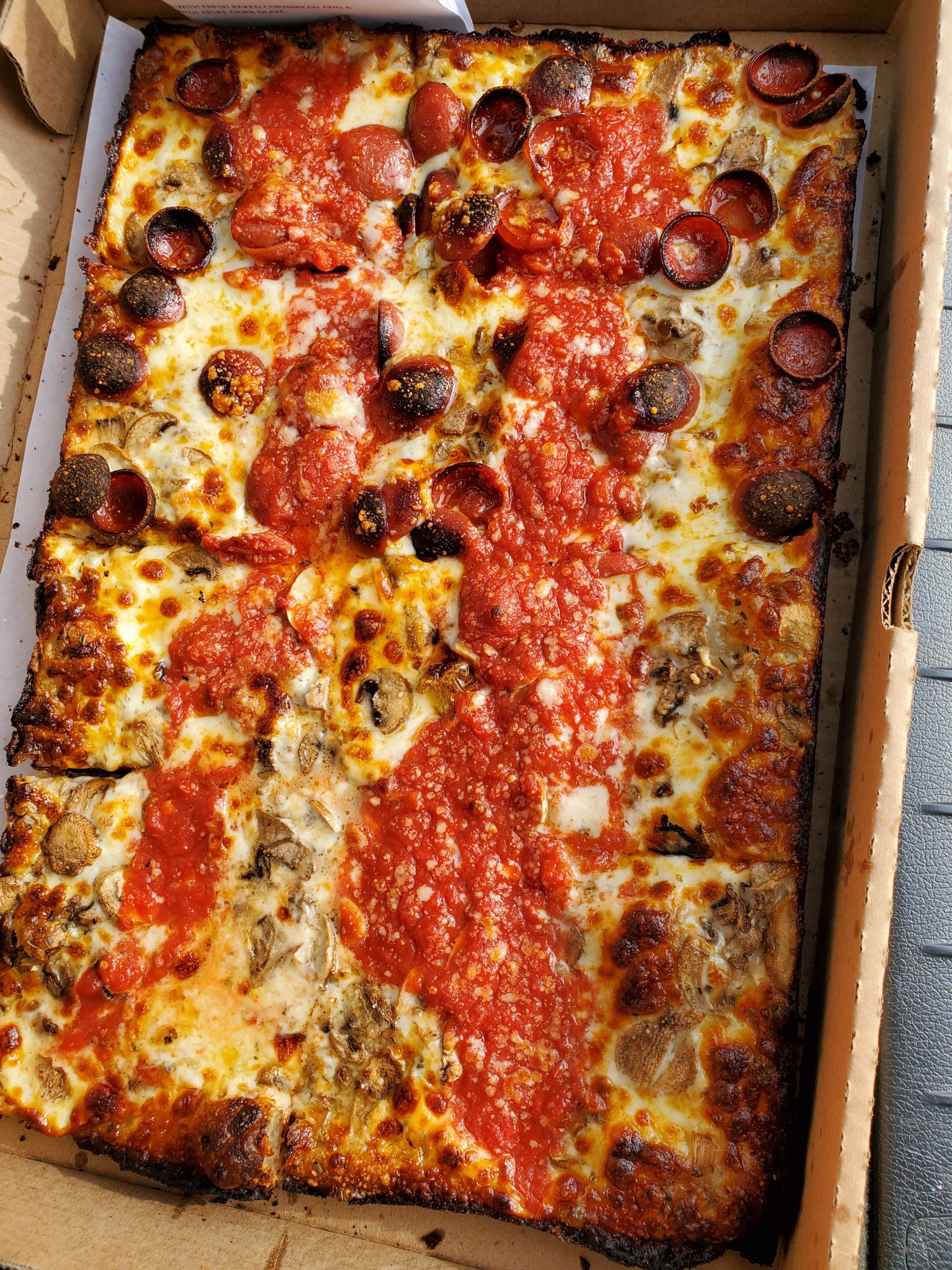 On the search for the best pizza in Connecticut, in this case the best Detroit style pizza in CT, brings us to Christos Restaurant & Bar in Wallingford.

So here’s the thing.

I grew up in Detroit. Where I thought the pizza was good. Then I moved to the Northeast.

But New Haven-style apizza and New York-style pizza made me realize the pizza I grew up with was garbage.

So imagine my shock when I read Detroit-style pizza is predicted to become trendy in 2021.

Now there is a self-fulfilling prophecy potentially going on.

The call for Detroit-style pizza becoming trendy is a year or two old already.

So what may be happening is that organizations say it’s becoming trendy.

Then people, wanting to be trendy, go out and find it.

Then more people try to find it, eventually making it trendy.

Where if the original organization didn’t say anything about it becoming trendy it never would have become trendy in the first place.

Let that one bake your noodle.

What is Detroit Style Pizza

Traditionally, Detroit-style pizza is a medium-crust pizza, baked in an iron pan, with lots of cheese and very little sauce.

The cheese also isn’t mozzarella, it’s brick cheese, which is kind of like Cheddar-meets-Havarti.

The crust is covered with cheese that gets that crisped cheese flavor.

Now here at Christos they say they use mozzarella.

But tasting the pizza, they are either using a type of mozz that tastes more like poly-o string cheese, or they are sneaking cheddar into the edges.

We got pepperoni and mushroom.

Pepperoni is a central component to Detroit-style pizza.

The sauce, which is placed in a racing stripe down the center of the pizza (not under the cheese) has a nice acidity to it.

The toppings here are excellent quality.

The crust, as in traditional Detroit-style pizza, pretty much tastes like focaccia with crisped cheese crust.

While the first couple of bites are impressive, eventually, the string-cheese-like quality of the cheese, that sweet but definitely not fresh taste, starts to get to you.

Whole pies only, so make sure to share with some friends.

The ironic thing is the best part of the pizza is the sauce, which is pretty much a footnote on the pizza. The crisped cheese edges are great, but the taste of poly-o cheese gets repetitive. Get pepperoni if you eat meat, and ask for a side of sauce.