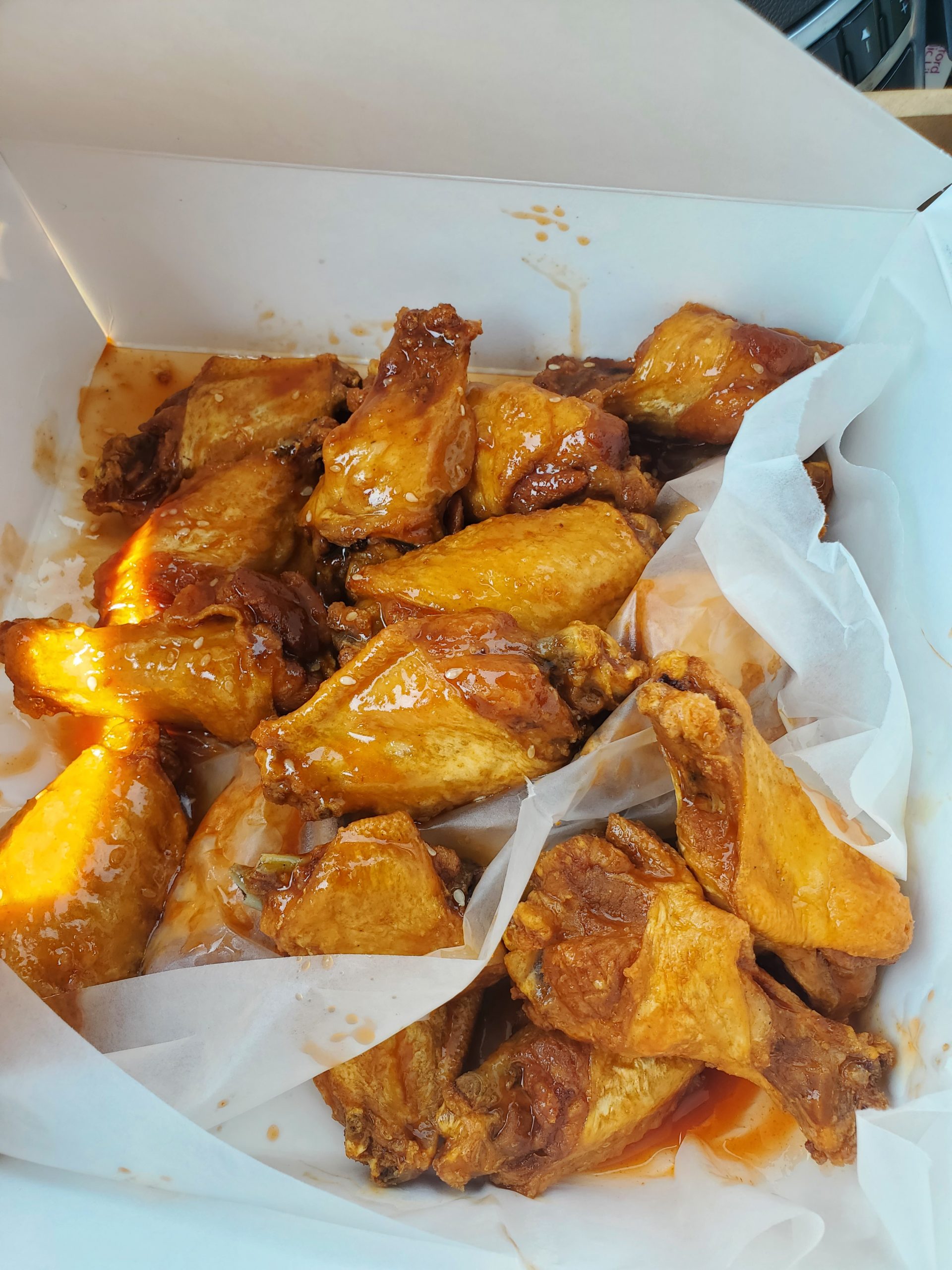 And after trying, I couldn’t figure out why people would believe this.

The wings are small, with minimal meat, and they are overcooked.

Does the inside of the place look good? Sure!

Is it homey in winter? Absolutely.

But we are looking for food here.

The two are not the same.

Here are, I argue, the three things that go into make a great wing (bone in).

Let’s break each of these down.

Wings have historically not been eaten directly but used in soups and stock for the bones more than the meat.

But today’s factory-farmed chickens have been selectively bred to be massive.

Take a chicken wing that you consider ‘good’ size, and imagine it coming from a bird 1/4 as big.

Because according to a study in 2014, today’s chickens can be 4x as large as those not selectively bred from the 1950s.

With that shrunk wing in your mind, you can see why it was not previously used for much.

But because we have been engaging in selective breeding (and likely some growth hormones), that’s not the world we live in.

We’ve got them big and meaty.

That’s how wings should be.

Organic, free range as well; this is down to selective breeding for size.

For our case study, the wings ad Bidwell are meaty enough, decent. Nothing fantastic and variable enough that sometimes you get a pitiful flat (the 2-bone one).

Wings live and die by their cooking.

There is not a lot of meat compared to bone and gristle, even in large chickens.

Overcooking can kill a wing.

Ever bite into a wing and the meat is all stringy?

Also when the inside of the wing is dry?

But no one wants soggy wings, so you need to hit them with high heat for enough time to unsure they are fully cooked.

Many wing places pre-cooks their wings (often baked) so the high fryer heat will just crisp the skin without overcooking.

But the wings should be juicy on the inside, with meat that isn’t stringy.

This is the big place Bidwell fails.

The outside skin is wonderfully crispy, but the meat inside is stringy.

A place will overcook their wings if they are fully cooked before going into the fryer and kept in long enough to crisp the skin.

Undercooking wings on the first cooking (baking) before frying helps this problem.

For our case study: Bidwell overcooks their wings.

The wings are stringy, especially on the flat.

People often neglect the first two criteria of what makes a great wing.

That doesn’t mean the sauce can’t fix a lot.

Even save a smaller and slightly overcooked wing.

But the sauce has to taste good.

It can’t just be that a place offers a couple dozen sauces.

While its nice in theory to have options, we aren’t all overly likely to try them all (like the honey peanut butter chocolate wing).

When it comes to buffalo, most places will start with what can be called The Base Buffalo sauce.

The Base is equal parts Frank’s Hot Sauce and Butter.

You know it when you taste it.

It’s pretty much the buffalo sauce at every chain restaurant (I know for a fact it is at TGI Friday’s).

There’s nothing wrong with The Base.

But a place should do a bit more.

Once you’ve tasted and become aware of The Base you can recognize it anywhere.

You can taste it when places are trying to hide the fact that they are using The Base.

and in their Buffalo hot wings (7/10), it’s more medium than anything else.

Lack of heat can come from using The Base, because Franks is great but hot it’s not.

While Bidwell offers quite a few sauces (not a substitute for small and/or over cooked wings), the Hot Teriyaki is pretty damn good.

The heat is close to a mango habanero and there is quite a bit of sweetness.

There is a nice balance to the heat and sweet.

So while the Hot Teriyaki wings are quite good (7.5/10), they are nothing earth shattering.

Nothing worth traveling for.

So why the hype?

I’m going to guess 3 factors are at play.

First, The inside of the place is really cool. It’s like an old tavern, wood beams, iron stove.

Ambiance has a way of affecting what we think about food.

Second, I’m guessing most people who love the wings here either grew up in the area or went to UCONN of Eastern for college.

Nostalgia has a way of affecting how we remember food.

And Third, people keep saying not only does Bidwell have great wings, they make a point to add “They have so many sauces to choose from”.

So does Buffalo Wild Wings.